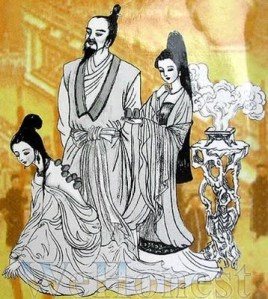 Cupping is a form of therapy widely used in Chinese Medicine and now is commonly incorporated into bodywork sessions.  Cupping has a long history. The Ebers Papyrus, written c. 1550 BC, considered one of the oldest medical textbooks in the Western world, describes how the Egyptians used cupping to help cure some frequent medical issues and how it was also used by people in the Saharan. Hippocrates, a Greek physician (400 BC), also used this technique to treat internal disease and some structural problems.

Ge Hong (281-341 A.D.), a southern Chinese official during the Jin Dynasty, wrote about it. He was interested in alchemy, herbalism and techniques of longevity. Ge Hong popularized the saying “Acupuncture and cupping, more than half of the ills cured.” Later on, this method found its way throughout Asia, Europe and is commonly known in Mexico and Central America.

In the dry cupping procedure, practitioners place specialized cups on the skin, they can be glass, bamboo, porcelain, plastic, or silicone. They then use either heat, an air pump, or manually to create a suction between the cup and the skin. As a result, a vacuum is created on the patient’s skin to draw out toxins from the tissues, dispel stagnant blood and lymph, and soothe muscle pain thereby improving the flow of Qi (energy) and blood.  Moving cups are used with oil first applied to the skin, so that the cups can glide over a larger muscle area, like the muscles lateral to the spine and the top of the shoulders.

At Armonía Health cupping therapy is used in conjunction with the massage session when the therapists deems it useful at no additional charge.  The cups are washed in hot water, soap, and disinfected after each use. 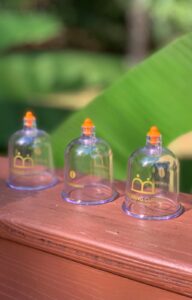 Please note since cupping pulls “toxins and stagnant blood” (traditional Chinese medicine concept) aka inflammation and lymph congestion, up to the surface of the body, this may cause a ring or purplish red discoloration to appear on the skin.  These marks usually dissipate within 1-5 days of treatment and are a normal part of the cupping process. Generally, these marks will only be experienced during the first few treatments or in areas of great restriction.

Maybe it’s time to try something new in your healing regimen if you haven’t had cupping before!”

You can also book directly with the practitioners; contact info available on our Contact Us page https://armoniahealth.com/contact/